The year is 2039, and 17-year-old computer prodigy Elliott is assigned to work on a global software initiative his deceased grandfather helped found. 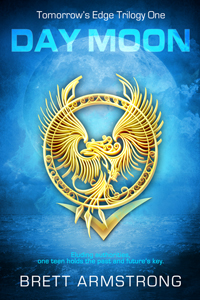 Project Alexandria is intended to provide the entire world secure and equal access to all accumulated human knowledge. All forms of print are destroyed in good faith, to ensure everyone has equal footing, and Elliott knows he must soon part with his final treasure:  a book of Shakespeare’s complete works gifted him by his grandfather. Before it is destroyed, Elliott notices something is amiss with the book, or rather Project Alexandria. The two do not match, including an extra sonnet titled “Day Moon.” When Elliott investigates, he uncovers far more than he bargained for. There are sinister forces backing Project Alexandria who have no intention of using it for its public purpose.

Elliott soon finds himself on the run from federal authorities and facing betrayals and deceit from those closest to him. Along the way, Elliot questions what is real and about truth, relationships and the meaning of freedom and security.

Following clues left by his grandfather, with agents close at hand, Elliott desperately hopes to find a way to stop Project Alexandria. All of history past and yet to be depend on it.

“’Day Moon’ grabs the reader by the imagination and doesn’t let go! I daresay it’s a classic in the making.” – Robert Walker, author of “Random Violence, Killer Instinct”

About the Author: Brett Armstrong is an award-winning author of Destitutio Quod Remissio, a story about the struggles of a Christian Roman senator. All profits from sales of the book were donated to charity. The author lives in St. Albans, West Virginia, with his wife and 2-year-old son.